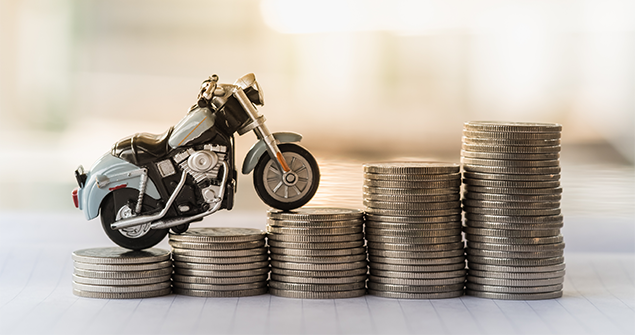 For many people, saving money is more important now than ever before. It seems that the price of everything from milk and eggs to housing and utilities is constantly soaring to new heights. In contrast, wages and household incomes have all but stalled out.

Most of us are taking numerous measures to help make up for the growing gap. We cut back on unnecessary expenses, such as dining out. We scale down to the basic cable or satellite package and remain on a constant search for coupon codes to cut costs on goods and services. Many fail to realize that one of the most effective ways to save money is by riding a motorcycle.

How Can I Save Money by Riding a Motorcycle?

Riding a motorcycle can save you money on several levels. This applies to upfront costs as well as ongoing expenses. While rumors abound about the high costs of bike ownership, countless motorcycle owners can reassure you that most of those claims are based on serious misconceptions. If you’re looking to save money, consider the following factors.

Let’s start off with the most obvious point: fuel costs. Motorcycles have smaller gas tanks than passenger vehicles, so they’ll naturally cost less to fill up. In fact, bikes generally hold anywhere from two to ten gallons depending on the make and model you own. On average, passenger vehicles’ tanks hold about 15 gallons, but they can have much higher capacities.

You may be thinking that doesn’t count for very much. After all, it could only mean that you have to stop to fill up more often, so the cost at the pump actually balances itself out. That’s just not true. Motorcycles offer much better fuel economy as well. Even the most efficient cars only get about 30 miles per gallon. How many miles per gallon does a motorcycle average? In most cases, motorcycles can get 50 to 60 miles to the gallon.

If you’re wondering how much money will I save on gas with a motorcycle, the answer depends on a few key factors. These include how many miles you typically travel, the type of bike you ride, your driving style, and current gas prices. If you’re not sure of exactly how much your passenger vehicle is costing you in fuel consumption, consider using a gas mileage calculator to figure it out. Then, use that same calculator to find out how much money you could save by riding a motorcycle.

Another area in which you’ll save money by riding a motorcycle is the purchase price. According to the latest reports from the automotive industry, the average purchase price for a new car has risen to between $30,000 and $40,000. That’s on the lower end of the spectrum.

To put this into perspective, new motorcycles sell for as little as $4,000. Granted, top-of-the-line models can go for $30,000 or more. Still, the price range for even high-end models tops out where that of basic passenger vehicles begins. You can save extra money by choosing a bike in the low or mid-price range, but even the more expensive models are comparable to cheaper vehicles. Buying a good used bike will grant you additional savings as well.

Motorcycle maintenance is often less costly than that of other vehicles. Specific annual maintenance costs vary greatly depending on several elements. These can include the age and condition of the motorcycle or vehicle in question and how gentle you are while driving. How much traveling you do and whether you do most of your driving in the city or more rural areas also factor into the equation.

Keep in mind, having routine maintenance performed as needed will actually lower the overall cost of maintenance over time. It’ll also reduce the need for extensive repairs and, by extension, the costs of those repairs. Treating your bike well and storing it in a place where the elements won’t take as much of a toll can help you save money when riding a motorcycle, too.

It’s no secret that the price of tires for any type of vehicle varies widely. You can purchase a cheap set of car tires for about $350 or cut the cost by half if you only replace two tires at a time. Remember, though, the cheaper the tires are, the more often you’ll have to replace them. That’s only considering the mileage they’ll get. Cheap tires are also more prone to damage, so you may have to replace them even more frequently.

Motorcycle tires can cost anywhere from $50 each to $150 or more, but the gap in quality isn’t quite so wide. Less expensive motorcycle tires often take you further than passenger vehicle tires in the same price range. It’s also important to point out that the cost of mounting and balancing is often lower with motorcycles. In terms of tires, you can save money by riding a motorcycle where initial cost, labor, and longevity are concerned.

Yet another way you’ll save money by riding a motorcycle is through lower costs of insurance coverage. It’s only fair to mention that the cost of motorcycle insurance depends on numerous factors. These generally include but aren’t limited to where you live, your age, your driving record, and the type of coverage you choose.

It’s impossible to pinpoint the exact difference in prices between motorcycle and car insurance because of all the variables involved. That being said, many riders note that their motorcycle coverage runs about half the cost of their car and truck insurance. You’ll stand to save even more money if you get coverage through your current auto insurance provider.

When you’re obtaining motorcycle insurance quotes, be sure to call providers rather than taking the online route. You’re bound to get more discounts and better rates by actually talking to an agent. They have access to in-depth details about your driving and payment history and other aspects whereas online coverage calculators are based on general information.

Save Money and Enjoy the Ride

In the ongoing quest to make your dollars stretch further, one of the best ways to save money is by riding a motorcycle. You’ll see lower expenses on everything from upfront costs to ongoing expenses. At the same time, you’ll find that even commuting to work and running errands are much more enjoyable on a bike than trapped inside a cage. Check out our selection and services here at American Motorcycle Trading Co., and get ready to start saving money from numerous angles.