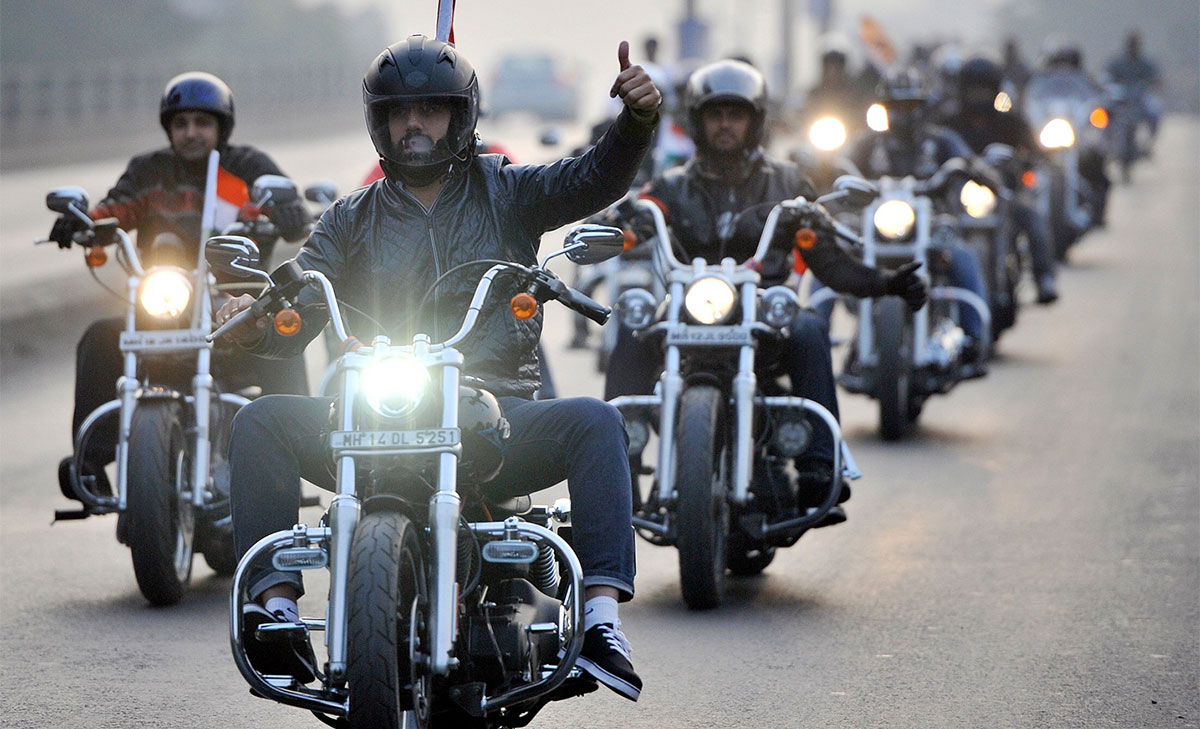 Most novice motorcycle riders get their sea legs by hitting the open road alone. Once you start to feel comfortable on your bike, though, heading out for a group ride can be one of the most enjoyable and exhilarating ways to spend time with friends, family members, and other motorcycle enthusiasts. Before your first group ride, take the time to familiarize yourself with the essential safety and etiquette tips below.

Now that you've figured out how to get your dream bike and get involved in the local motorcycle community, it's time to start paying more attention to other riders you see on the road. Experienced group riders always follow the same basic practices.

In the motorcycle world, the term staggered formation refers to the way that groups of riders create space for each other within their lane. Staggering the bikes gives each rider a clear view of the road ahead and plenty of space for sudden maneuvering should potholes, rocks, road debris, or critters get in the way.

In a typical staggered formation, the leader takes the helm on the left side of the lane. The second rider takes the right position, the third rider gets into line well behind the leader on the left, and so on and so forth. According to the Motorcycle Safety Foundation, the best way to determine spacing is to leave a two-second gap between yourself and the rider in front of you.

Most avid riders suggest putting the person with the least experience in the second position, right behind and to the right of the leader. The rest of the positions in the middle of the formation are less important, but make sure everyone in the group knows where to ride before setting out.

A good leader will watch the mirrors and wait until there's plenty of space in the other lane to move everyone over at once, but that's not always possible. If you have to change lanes separately, do it safely while maintaining your speed, then return to your position once you've gotten into the new lane. Just remember that unless you're the sweep, there are other riders behind you who also need to move over.

Communication is very important in group rides, but unless everyone is outfitted with a headset beneath his or her helmet, it can't be done verbally. Instead, the leader will activate turn signals early and/or use hand signals for upcoming turns and other essential communications. As with bike riders and drivers, a left arm straight out indicates an upcoming left turn, a left arm bent at a 90o angle indicates that the group should be prepared to turn right, and an arm extended straight down with the palm facing back indicates a stop.

There are also some universal hand signals that only get used in the moto world. Keep an eye out for these common signals while on the road:

Most group riders follow these basic signals. However, every group is a little different. Don't be afraid to ask about hand signals and protocols before setting out on a ride or ask for clarification at stops if something didn't make sense.

When to Switch to Single File

A double-file staggered formation is the safest way to ride on highways. There are, however, some circumstances that require adopting a single-file formation. The leader should signal it in advance, but you should be prepared to form a single-file line if there are curves ahead, the visibility is poor, or there's no way for the group to maintain the posted speed limit.

Getting the basics down as described above can help make any new rider comfortable in group formations. There are, however, a few more etiquette tips you should follow any time you're hitting the road with a group of other riders. You should:

When in doubt about a particular etiquette issue or a unique hand signal used by your group, ask someone who's been riding with them for longer. It's always best to defer to the more experienced riders, even if their advice is at odds with the information and tips listed above.

Put That Knowledge to Good Use

There's no sense in learning about the ins and outs of group riding unless you plan on putting all that knowledge to good use. Now that you understand the basics, seek out a group of like-minded riders and start enjoying those group rides.