10 Most Influential Bikers of All Time 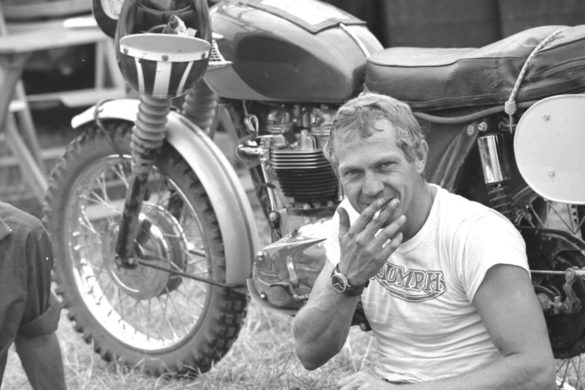 For as long as there have been motorized cars, there have been motorcycles. In 1885, Gottlieb Daimler and Wilhelm Maybach created the very first internal combustion, gas-fueled motorcycle. The motorcycle has exploded in popularity since that day, developing several branches of its own unique biker culture, separate from car culture.

Each generation seems to have made its mark on biker culture, leaving behind a trail of famous and influential bikers that became the face of their hobby during their time. For motorcycle lovers who dream of getting their most reliable ride, looking up to these biker icons is second nature. Below is a list of 10 of the most influential bikers of all time.

Steve McQueen was born Terrence Stephen McQueen in 1930 in Beech Grove, Indiana. His acting career led him to establish himself as an adored “antihero” in several movies, and riding motorcycles became a key part of that persona. Nicknamed “The King of Cool,” McQueen was an avid motorcycle enthusiast who insisted on performing many of his own stunts.

Steve McQueen’s love of motorcycles led him into competitive off-road motorcycle racing under the alias Harvey Mushman while riding a BSA Hornet. He went on to race in several of the West Coast’s top off-road races, including the Mint 400 and Baja 1000. Steve McQueen is said to have owned around 100 classic motorcycles and 100 exotic ones. His reputation for being a master of biking has defined his legacy.

It is hard to think of famous motorcyclists without mentioning Evel Knievel. Born Robert Craig Knievel in 1938 in Butte, Montana, Evel Knievel chose his own nickname in 1956 after being arrested for reckless driving and spending the night in jail. He was a thrill-seeker to the max, and that was evident in his motorcycle hobby.

Evel Knievel was a master stuntman, with his first known jump having been jumping two mountain lions and a crate of rattlesnakes using a Honda 250cc. He would go on to perform hundreds more stunts using a range of motorcycles, including the Triumph Bonneville T120 and Norton Motorcycle Company 750cc.

James Dean is a cultural icon for several reasons, including his hallmark social estrangement, teenage disillusionment, and suave edginess. James Byron Dean, born in 1931 in Marion Indiana, starred in such bad-boy flicks as Rebel Without a Cause and East of Eden. t is no wonder that motorcycle riding became a quintessential hobby when crafting his iconic loner persona.

James Dean was known for his reckless driving, earning him the nickname “One Speed Dean.” He acquired his first motorcycle early on, which was a Czech 1.5 horsepower bike that carried the nickname “The Popcycle” because of how often it backfired. Later, he would go on to own such impressive motorcycles as an Indian 500, several Harley Davidson models, a Norton 500, a Royal Engfield 500, and his pride and joy, a Triumph Trophy 500.

Ed Roth nicknamed Ed “Big Daddy” Roth, was a Beverly Hills native-born in 1932. Ed spent his childhood dreaming of airplanes, hot rods, and motorcycles. His father was strict and kept him from doing much outside the home, but always had a steady supply of mechanics tools with which he could tinker around. By 1958, Ed Roth had transformed his own garage into a studio where crazy mechanical creations came to life.

When Ed was in his 20s, he got involved with several local motorcycle clubs and held parties as his bike shop. He became a key member in the Hell’s Angels and later admitted to doing things of which he was not proud. After renouncing his membership and becoming a Christian, the Henry Ford Auto Museum commemorated his work by displaying some of his most wild mechanical creations.

Jay Leno may be famous for his comedy, but he has also gained a huge reputation for this motorcycle collection. After retiring from being a talk show host, he started a new show called “Jay Leno’s Garage” on which he features amazing bikes and cars weekly.

Jay Leno has one of the most extensive private bike collections in the United States, and it grows larger every year. His collection boasts such beauties as a 375 HP Frankenstein with a helicopter engine, dubbed the fastest motorcycle in the world, and a whole slew of Brough Superiors.

Von Dutch, born Kendrick Robert Howard in Los Angeles in 1929, started working as a pinstripper at the tender young age of 10. Most people believed him to be a professional until learning his age as his talent was incredible. Von Dutch also ended up co-owning Kustom Kulture, which focused on wild motorcycle builds and culture, with Ed Roth.

Keanu Reeves is nothing short of a modern motorcycle legend. Known for starring in such blockbuster hits as the Matrix, Keanu gained a reputation of being “Hollywood’s nice guy” by doing things like gifting Harley Davidson motorcycles to the 12 members of the Matrix stunt crew.

Keanu Reeves has ridden motorcycles in several of his movies, letting his private hobbies take part in his daytime passions. He started a business called ARCH Motorcycles in Los Angeles, which created custom American motorcycles. He also has an extensive motorcycle collection that includes such beauties as a 1974 BMW 750 and a Harley Shovelhead.

Ewan McGregor is more than just a Jedi master on screen, he is an avid motorcycle enthusiast. Insurance has barred him from riding motorcycles while filming movies, but as soon as he hits the director’s seat, all bets are off. He is even known for doing his own mechanical work on his bikes, which he states as being part of the joy in owning them.

Lawrence Desmedt, nicknamed Indian Larry, was born in New York in 1949. He earned his nickname by establishing himself as the go-to mechanic for working on Indian motorcycles and riding the streets of NYC on a chopped Indian bike. He earned fame by being a world-class motorcycle builder, biker, artist, and stunt rider. Unfortunately, his fame grew the most after his death in 2004.

No influential biker list would be complete without including Richard Hammond. Richard Hammond earned his fame through his participation in the BBC TV show called “Top Gear.” Hammond’s co-stars often mocked him for his love of motorcycles, as Top Gear is a car show, but they did once allow him to ride a bike on an episode of “The Grand Tour” - straight across Mozambique!

Hammond has an impressive bike collection that he has amassed over the years. It includes over 20 classic Ducati’s, a 1999 Bimota SB8R, a vintage Brough Superior SS100, and many more highly sought-after models.

There it is, the top 10 most influential bike riders of all time. Each person on this list has rightly earned their place with their impressive stories, collections, and experiences that have contributed to the rich and exciting motorcycle culture we enjoy today.